From Florence to Rome, we took a 45 minute flight out of Florence Airport (FLR) to Leonardo da Vinci International Airport (FUC).  I would recommend taking a train instead, because this airport is an hour of riding a bus to get to Rome’s city center.

However, if you do fly into Rome, once we arrived we took a bus right out of the airport. You can also take a train from Fiumicino Airport to the Termini Station (downtown Rome).  The bus drops you off right outside of the Termini Station, so just go with whichever is cheaper. 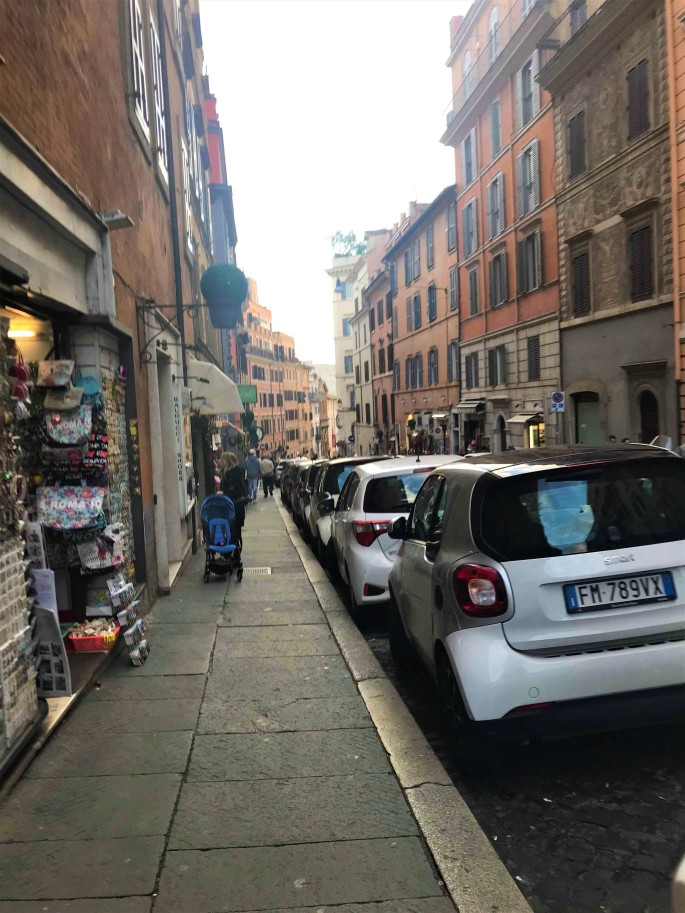 From there we walked to our hotel, which was the Rome Marriott Grand Hotel Flora.  The hotel room was a little small, and because it is up by the Borghese Garden, it was a little out of the way from everything we wanted to see in Rome.

The first night we walked down to the Trevi District and ate at a place called Piccolo Bucco.  It is a delicious pizza place.  The secret to their pizza is folding the middle part one to the crust, so you get all the flavor with the yummy crust!  We then walked the Trevi district a bit, getting some gelato on the way home. 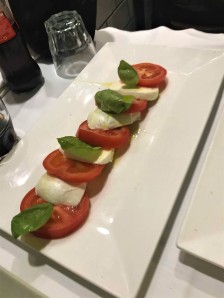 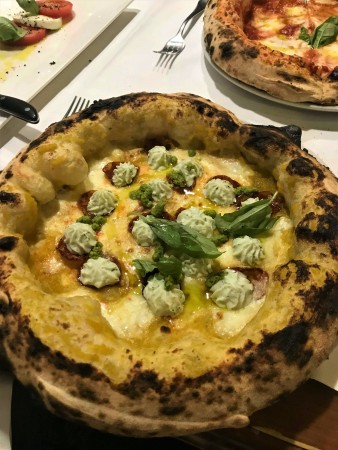 We were fortunate enough to have Liz sign us up for a Rome in a Day Tour: Skip-a-line pass for the Vatican and Colosseum.  This was completely worth it. Skip-a-line Tickets

We were picked up from our hotel at around 8:00am, which was included in our ticket prices.

With this pass, we started at the Vatican, where we had a guided tour (headphones and radios provided) throughout the Vatican museums (the maps room, Raphael’s rooms, etc.).  Then, we continued on to the Sistine Chapel (where you are not allowed to take pictures), this room is STUNNING. It took Michelangelo 4 years to paint the ceiling and 5 years to paint the “Last Judgement” on the altar wall.  Then, we continued in to St. Peter’s Basilica, where the Pietà is.  This is also done by Michelangelo, depicting Mary holding Jesus after his crucifixion. After walking through St. Peter’s Basilica, we walked through St. Peter’s Square, and ended at the Vatican museum. 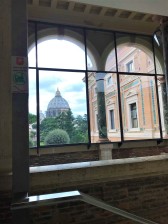 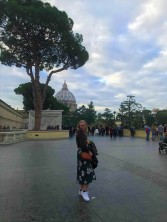 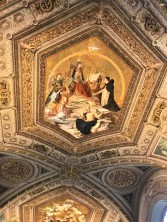 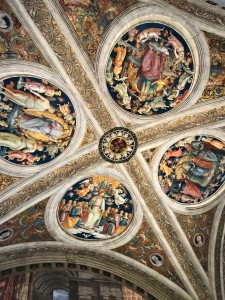 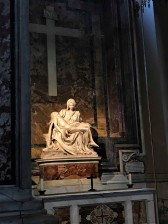 Then, we stopped for lunch at Satiricus. It is literally right next to the Vatican museum. They served us the best lasagna I have ever had in my whole life. The lunch was also provided through the tour which was really nice. 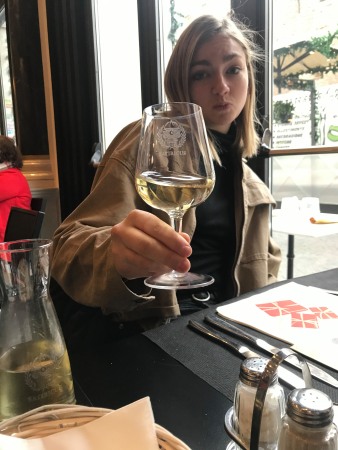 Next, we were driven over to the Colosseum, where we met our next tour guide. From here, we walked throughout the Colosseum, then headed over to Palestine Hill, which are where the palaces of the emperors stand. There is an amazing view of room here as well! Lastly, we walked throughout the Roman Forum, and were given quite a history listen all many things over 2,000 years old. 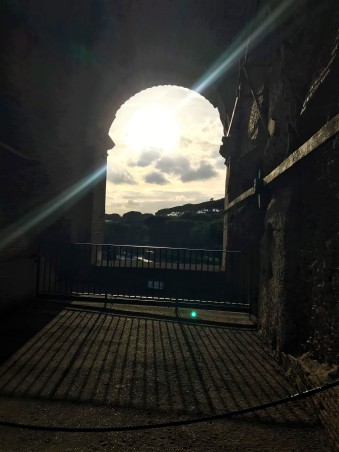 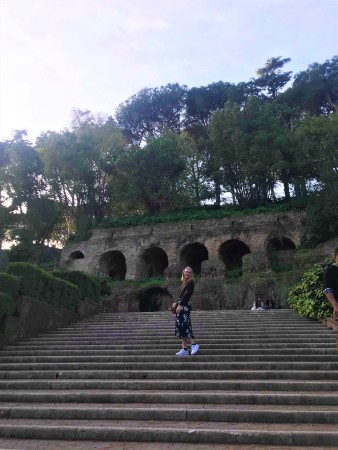 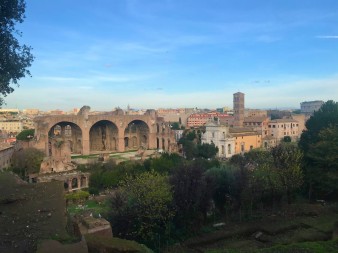 Note: The one thing that was unfortunate was that we did not get anytime to stop in the gift shops for any of these major sight, which was unfortunate.

After all of that, we were released, and decided we were starving. We looked up a nearby restaurant and ended up at Ristorante Da Alessio. Here we, of course, got a bottle of red wine, mussels and clams for an starter and pasta!  I had the Rigatoni Carbonara, which was absolutely delicious (white sauce with bacon!).  And we finished with strawberry tiramisu and creme brulee.  And of course….a free round of limoncello.

Ken and I then went to an Irish Bar in Rome (lol) called The Albert.  Staff spoke English and drinks were reasonably priced.  AND I could get a Guinness 🙂 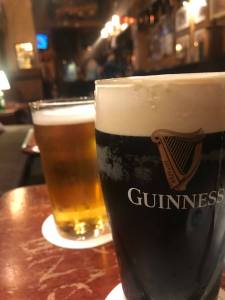 I signed us up for a walking food tour that also got you access into different sights around the Trevi District.  Link to Tour

Our tour guide was amazing, and we tried SO MUCH FOOD! We were stuffed by the end of it. We stopped at six different food places and five different historic places: 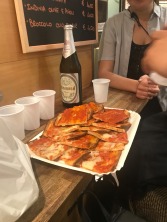 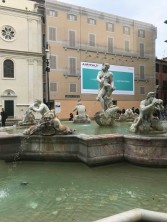 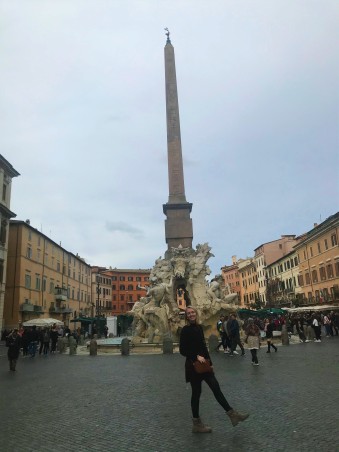 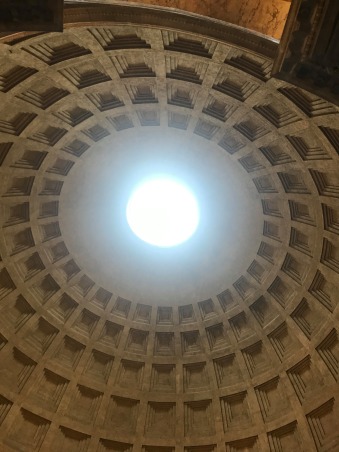 After the tour, we then walked to the Spanish Steps, which were very close by. And climbed up them to visit the Borghese gardens.

Then, we went back to our hotel and took a nap.

Our tour guide invited us to his basketball game that night, so we decided to drop into the college bar near by and then part of the game.

The next morning we took the train (Roma Termini) to the airport (Fiumicino Aeroporto); this was an hour train ride.  We then got on a plane and headed to Palermo Sicily.

Rome for three days was perfect.  The weather was beautiful at about 60 degrees the whole time (even in the middle of December).